“Players always want to blame someone else or circumstances out of their control for their problems. It’s an embarrassing state. Many of today’s players don’t want to be embarrassed, so they spread the embarrassment. The coach didn’t play him enough or he didn’t get enough shots or he has a banged up finger. You find a way not to accept the blame. The better players learn to say, ‘I played bad, but tomorrow I’ll play better.’ A lot of younger players are afraid to admit they have bad nights, but everybody has bad nights and it’s how you rebound from those bad nights that dictates what kind of player you are going to be.” –Michael Jordan 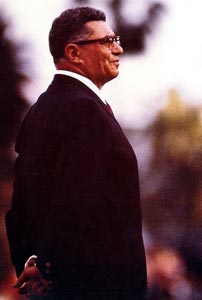 “Don’t succumb to excuses. Go back to the job of making the corrections and forming the habits that will make your goal possible.”
–Vince Lombardi

“People who blame others for their failures never overcome them.” –John Maxwell

"The man who complains about the way the ball bounces is likely the one who dropped it." -Lou Holtz

“Before we can eliminate excuses that keep us from improving we have to recognize what those excuses are. Write down your top three excuses and then eliminate them for the next month. This will create a habit of not using them anymore.” –Kevin Eastman
Posted by BOB STARKEY at 2:57 AM